Udaytara Burirchar Village, Mathbaria Upazilla, Pirojpur District
Who is the Builder of Hundred Years Wood (Kath) Mosque?
Moulovi Momin Uddin A. He was the follower of Peer Badsha Mia who was the son of Faraizi Movement leader Mohsin Uddin Dudu Mia.
Brief Description of Hundred Years Wood (Kath) Mosque
The making of this mosque was started in 1913. The main maker was Harkumar Nath from Necharabad Upazilla of Pirojpur. He had 22 assistants. After seven years of labour, they finished the making in 1920. 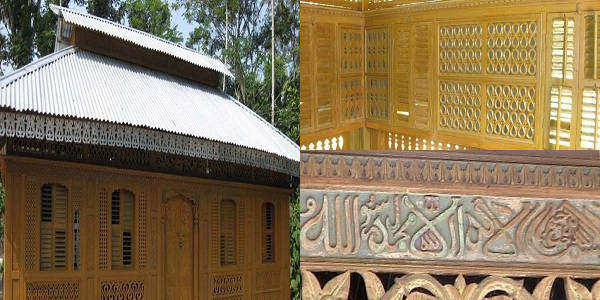 There are two doors and twelve windows in this mosque.  It is 20 feet long and 18 feet wide. The elements of this mosque were collected from Mianmar, Assam and Tripura.

Archaeological Department of Bangladesh is looking after this mosque. According to UNESCO report, it is one of top thirty excellent art-enriched mosques in Bangladesh. On 4th February, 2014;  the mosque fulfilled 100 years.