This person is famous for trying to find out the route to India. But he was unable to search the route. Rather he discovered America. Christopher Columbus made four trips to Caribbean and South America.

1st trip
He made his first trip in 1492 and discovered San Salvador. He named the people Indian as he thought that he had stepped into Asia. It is shameful that his men were run into slavery. His men travelled Haiti, Cuba and more. 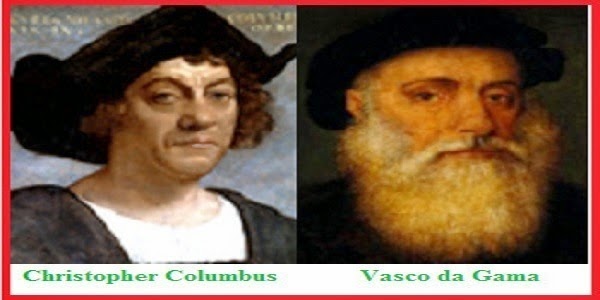 Columbus made this trip in 1493. He established a base in Haiti and the Dominican Republic. The goal of this trip was to find gold and capture the slaves.
3rd trip
Christopher Columbus made this journey in 1498. He set foot into Trinidad and Venezuela on this trip.
4th trip
This was the last trip of Columbus made in 1502. He travelled Mexico, Honduras, Panama and Jamaica.
Christopher Columbus died in 1506. Now, he is buried in eastern Dominican Republic.
Vasco da Gama
This person is identified as a Portuguese explorer who was born in 1460 (it is 1469 in some sources). He was a real brave traveller. He is recognized as one the most successful explorers in the age of discovery. He was a pioneer in establishing Portuguese colony in Asia.
Vasco da Gama discovered the sea-route to India from Europe. He was the first person who become successful to reach India through water way. But when he started this journey the people thought that he would not be successful as it was impossible for the Europeans. He made three voyages to India. These are:
1st trip
Vasco da Gama started for India from Portugal on July 8 in 1497 and reached India on May 20 in 1498. The journey covered almost one year to reach from Lisbon to Calicut sea-port of India. He was received cordially in India. But he was told to pay huge tax later. Then he left India with trading goods and some Indian hostages.
2nd trip
It was a follow –up expedition of Vasco da Gama. The expedition was full of action and adventure in India. He made many cruel actions and tasks in this journey.
3rd trip
It was his last journey to India along with his two sons. He made some strong decisions and withdrew some Portuguese officials in India. But soon he died.
After coming to Portugal, Vasco da Gama was turned into hero. The King became happy and gave award to him.
Vasco da Gama was patronized by King Manuel 1 and King John 3. He played a role of King’s representative in India and was awarded with Portuguese viceroy. He made outstanding accomplishments and explorations. He has been getting numerous homage worldwide.
Vasco da Gama died in 1524. He was first buried in India and later his remains were brought to Portugal.

Finally, I want to say that America and India were very much tough to reach by the Europeans before their journey. They are hero of travelling. These two names are the symbols of adventurous travel. Christopher Columbus and Vasco da Gama are unique and they have made huge contribution in the travelling map of this world.