They are famous in the history of travelling. There are very few travellers who are as famous as them. They have created successful history in travelling. Travelling was passion and profession for them. Let’s gain knowledge about these two great explorers.

I have indeed – praise be to God – attained my desire in this world, which was to travel through the Earth, and I have attained this honour, which no ordinary person has attained.

The above speech is given by Ibn Battuta. This is the person who travelled over 73000 miles. He is one of the best travellers of this world. We are familiar this person through the book Rihla that means Journey. He is well recognized to the Muslim and non-Muslim world for his the then worldwide travel. He travelled Asia, Europe and Africa. Ibn Battuta is a perfect superstar to me. There are very few persons who are comparable to him for his travelling.
I become surprised when I see the list of his visited countries of this 21st century world. This is why Ibn Battuta is a name of a surprise to me. Let’s have a look at the list:


Saudi Arabia, Algeria, Tunisia, Libya, Egypt,
Syria, Oman, Bahrain, Morocco, Iraq,
Iran, Israel, Yemen, Somalia, India,
Bangladesh, Turkey, China, Philippines, Mali
Vietnam, Maldives, Sri Lanka
This Moroccan traveller was born in 1304 and died in 1368/1369. Though there are some questions about the journey of Ibn Battuta, he is one of the best known and recognized travellers of this world. 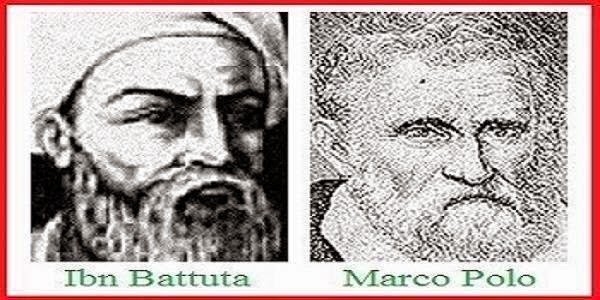 Marco Polo
This traveller is memorable for his outstanding contribution in travelling. He is an Italian explorer. This is why he is popular in Europe. His fame has been spreaded all over the world. He was not only a traveller but also a merchant. For this reason, he got recognition of successful trader in line with a famous traveller. He is pioneer in travelling for the European travellers.
He made an epic tour to Asia for 24 years. It is known that he travelled 24000 kilometres. He is especially remembered for visiting Mongol empire and the great Kublai Khan. Marco Polo was awarded the position of ambassador and governor of the city Yangzhou. It is great information that he knew 4 languages.
He got the opportunity of visiting many places on the way to China.  He had to get the experience of seeing Burma, Singapore, Sri Lanka, Persia and many more places for the return journey to Italy.
After returning from Khan’s empire, Marco Polo joined in the war against Genoa republic in favor of Venice. But he was imprisoned in Genoa. He expressed his travel story to a fellow prisoner. After that, we become able to know about the journey of Marco Polo. Yet, there are some questions on his journey which makes doubt about his huge experience of traveling.
Marco Polo was born in 1254 at Venetian republic. He died in 1324. The famous San Lorenzo is the place where he was buried. The Europeans were introduced to Central Asia and China by him. He inspired travelers like Christopher Columbus for traveling. He is no more today. But he will be remembered for his vast experience of traveling.
In fact, Marco Polo and Ibn Battuta are the real heroes of traveling. The travelers follow their spirit and start the journey for unknown feeling the strength of them. Their total travel was aan dventure indeed. It is impossible to become vanished the memory of adventurous journey made by Marco Polo and Ibn Battuta in this 21st century.